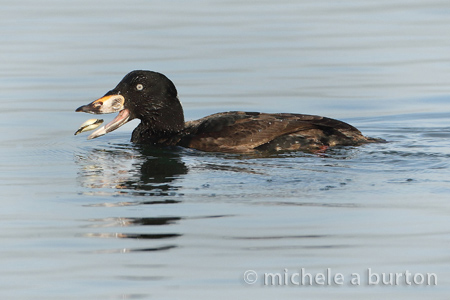 I have always had a strong stomach. I enjoy eating hot and spicy foods, with few digestive problems. My culinary escapades seem positively weak compared to the eating habits of the scoter family.

Scoters are diving ducks who winter along the coasts of the lower 48 states. Many of them breed in the Hudson Bay area and in the Arctic. Surf scoters are a common sight on Puget Sound during the winter months. The males are sometimes confused with puffins because of their jet black color and orange and white beaks.

The diet of Surf scoters is primarily mollusks, with some crustaceans, small fishes and marine worms thrown in to their diet. After diving for clams or mussels, Surf scoters eat the whole thing - shell and all. Their powerful gizzard helps them to process the food from the shells.

I watched a small group of mostly female and juvenile scoters feed. In the course of a quarter hour, some of the ducks appeared to eat at least a half dozen clams. Pretty amazing!