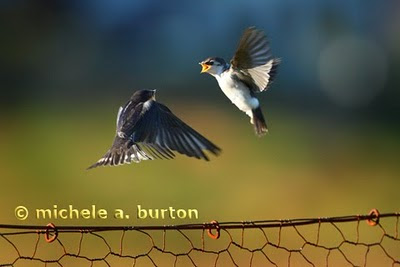 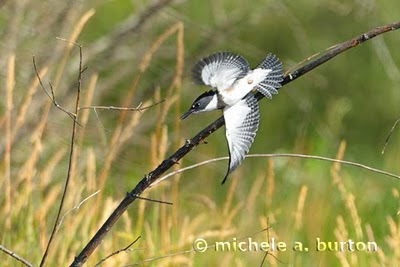 Male Belted Kingfisher in flight with wings extended
Ceryle alcyon
Tacoma, WA
This week it was very hard to choose which single photo to include. There were several themes to this weeks work, including birds in flight, wetland ponds, and juveniles competing for attention and food from adults.
I volunteered Thursday and Friday monitoring western pond turtles for a joint project between Washington Department of Fish and Wildlife and Woodland Park Zoo. While doing my work, I was impressed with the biodiversity of plants and animals around the ponds. There were at least 7 species of dragonflies and damselflies in abundance. The willows and flowering plants were providing forage for a million (at least it seemed so) American goldfinch and House finch juveniles. And the skies were filled with a myriad of species from Red tailed hawks and Northern flickers to swallows and hummingbirds.
Late in the afternoon the ponds became alive with action after the heat of the day. The male Belted kingfisher was busy flying between several low perches. The Barn and Tree swallow juveniles were perched fence top, hoping to have the clearest signal to incoming adults with food. These two Tree swallows got in a bit of a tussle competing for the best spot.
Belted Kingfisher in Flight Flying Juveniles Photo of the Week Tree Swallow