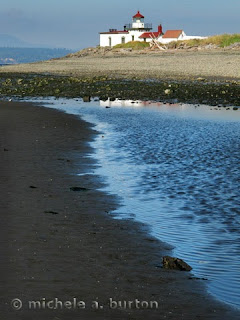 The West Point Lighthouse, built in 1881 by the U. S. Lighthouse Service, marks the hazardous shoal and northern entrance into Elliott Bay. The beacon, located in Seattle’s Discovery Park at the base of Magnolia Bluff, is a small squat tower, rising only 23 feet above the low sandy point. The West Point Light Station, which remains essentially unchanged from the time it was built, in on the National Register of Historic Places. In addition to being an important piece of Seattle’s maritime history, the lighthouse continues to be a vital aid-to-navigation.

Pleasant on Pleasant Days
Although, seemingly a pleasant location with a spectacular view, during the stormy winter months the light station takes quite a beating. Logs and debris have been tossed up on the station grounds, sometimes against the stout masonry buildings. In 1885, a winter storm washed away much of the sandy beach and grounds at the light station. Logs were used to build a protective bulkhead and the damaged area was backfilled with sand and gravel. Over the years, large quarry rocks and riprap have been placed along the beach as a breakwater to further protect the lighthouse from the elements.

To read more of the essay by Daryl C. McClary, check out http://www.historylink.org/index.cfm?DisplayPage=output.cfm&file_id=4183﻿
To view an historic 1907 image of the lighthouse, featuring the first outing of the Seattle Mountaineers,  photographed by legendary photographer Asahel Curtis, visit Paul Dorpat's site at http://pauldorpat.com/?page_id=1650
Discovery Park Landscape Lighthouse Photo of the Week Seattle West Point lighthouse