on November 17, 2010
Containers from the Port of Seattle
being loaded onto trains for
transport across the country 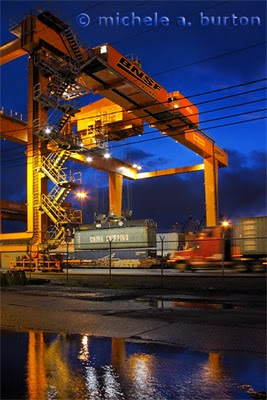 Dusk
Seattle, WA
November 17,2010
In April of 2008, Burlington Northern Santa Fe Railway (BNSF) began using four wide-span, electric, rail-mounted gantry cranes at its Seattle International Gateway (SIG) intermodal yard. BNSF is the first railroad in North America to install these cranes, which not only produce zero emissions on site, but allow more flexibility, increase capacity and reduce the need for diesel trucks to move containers within the facility. The new cranes increased BNSF’s capacity at the facility by about 30%. They span three tracks and are a green solution as they produce zero emissions, are quieter than the equipment they replaced and can regenerate power each time they lower a load.
To see the trains in action, head down to the SODO district of Seattle.