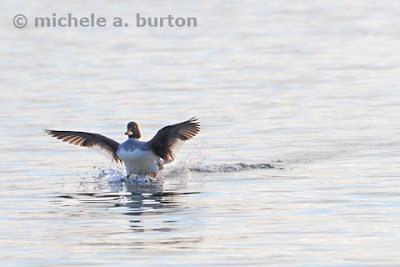 When and Where to Find in Washington
Common Goldeneyes are among the least common breeding ducks in Washington, found nesting only in the northeastern portion of the state, with most birds nesting in north-central and northeastern Canada. From November to April, however, Common Goldeneyes are fairly common on both fresh water and calm salt water in both the eastern and western lowlands. It is one of the most common wintering diving ducks throughout much of Puget Sound, and can be found in large concentrations in the sound and along the Columbia and Snake Rivers.
Birds Budd Inlet Common Goldeneye Flight landing Olympia Photo of the Week Water