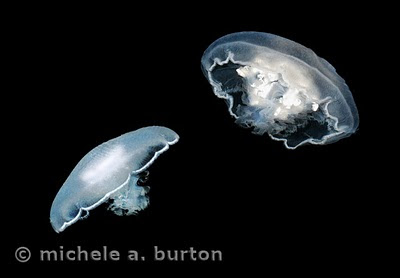 Moon Jellyfish
Swantown Marina
Olympia, WA
January 13, 2010
Manipulated and collaged using filters in Photoshop CS4
This photo was taken off the public boat launch at Swantown Marina in Olympia. The day was pretty murky, so I really boosted the contrast when I brought the images home into the computer.
Moon Jellyfish (Aurelia labiata) are native to the West Coast and common in the waters of Puget Sound. They are named for their translucent bell shape. According to the Monterey Bay Aquarium,
"The coloration of a moon jelly often changes depending on its diet. If the jelly feeds extensively on crustaceans, it turns pink or lavender. An orange tint hints that a jelly’s been feeding on brine shrimp."
To see Moon Jellyfish up close, make a visit to the Point Defiance Zoo and Aquarium in Tacoma, where they have a terrific exhibit of Jellyfish and other Puget Sound Residents. 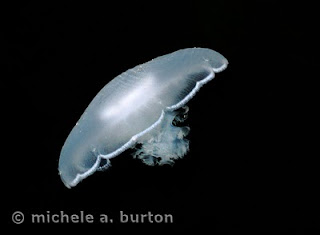