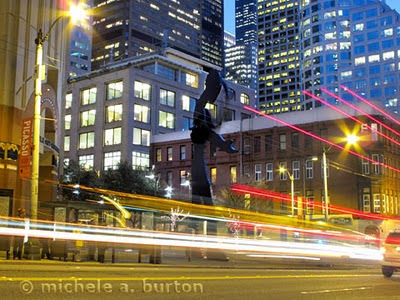 Hammering Man at Dusk
Seattle Art Museum
Seattle, WA
January 20, 2011 5:00 PM
I don't get to Downtown Seattle much these days. I am either passing by on I-5 or heading to a friend's at South Lake Union. It was truly a treat to enjoy the bustle of rush hour commute as I waited for my concert at Benaroya Hall.
from Seattle Art Museum's Website:
General Information
Jonathan Borofsky, American
Hammering Man, 1992

Facts
There are numerous Hammering Man sculptures of different sizes all over the world including New York, Los Angeles, Germany and Japan. Seattle's is 48 feet high and weighs 26,000 pounds. Each Hammering Man is marked with a unique number. Seattle's is #3277164.

The Hammering Man's arm "hammers" silently and smoothly four times per minute from 7 am to 10 pm every day. It runs on a 3-hp electric motor set on an automatic timer. Hammering Man rests its arm each evening and every year on Labor Day.

About the Artist
Jonathan Borofsky was born in Boston, Massachusetts in 1942. After graduating from Carnegie Mellon University in 1964, he studied at Ecole de Fontainbleau in Paris. In 1966 he received a Master's degree from Yale School of Art and Architecture. Having lived and worked in New York and Los Angeles, he moved to Maine in 1992 to return to his roots on the East Coast. Over the years he has created a wide range of works in diverse materials but at the core of his endeavor lies the act of "Counting from One to Infinite," which he began in 1969 and continues to the present. During the 1990s, he completed over 20 public art installations, including a 100-foot tall version of "Molecule Man" for the Allianz insurance company in Berlin. He has had a one-man exhibition at the Whitney Museum of Art in New York as well as at other important museums in the world. His major monumental sculptures can be viewed in Los Angeles, Kassel Germany, Basel Switzerland and other cities.

The Hammering Man is a worker. The Hammering Man celebrates the worker. He or she is the village craftsman, the South African coal miner, the computer operator, the farmer or the aerospace worker-the people who produce the commodities on which we depend. This Hammering Man is 48 feet tall. It is constructed of steel (hollow-fabricated) and weighs over 20,000 pounds. A structural steel base-plate is bolted to a cement-block footing below ground level so that the architect's chosen material for the plaza can be brought up to flush to the feet of the sculpture. The Hammering Man appears to be standing (and working) on the plaza without a base in between. The black silhouette of the figure is, in fact, 30 inches wide: body (10 inches), arm (10 inches), space between arm and body (10 inches), as well as an extra 16 inches width at the top for the motor. The motorized hammering arm will move smoothly and meditatively up and down at a rate of four times per minute. Electricity runs from the motor down inside the sculpture and under the plaza to an on-off switch location. The Hammering Man is set on a timer and rests during evening and early morning hours. The sculpture has been sited so that the many pedestrians and drivers moving up and down First Avenue can enjoy the animated form while contemplating the meaning of the Hammering Man in their own lives.

This sculpture is the second largest Hammering Man on the planet. A taller version is in Frankfurt, Germany. My goal is to have several different Hammering Men placed around the world-all working simultaneously. Other big outdoor versions of this work are in Japan and Switzerland. In the U.S. there are Hammering Men sculptures in New York, Minneapolis, Los Angeles and Washington D.C., among other places. It is a concept which helps to connect all of us together and yet gives each specific Hammering Man site the potential for its own personal interpretations. The State of Washington is known for its aerospace, electronics, timber, fishing, agriculture, and gold mining industries-people working with their hands. Let this sculpture be a symbol for all the people of Seattle working with others on the planet to create a happier and more enlightened humanity.

I want this work to communicate to all the people of Seattle-not just the artists, but families, young and old. I would hope that children who see the Hammering Man at work would connect their delight with the potential mysteries that a museum could offer them in their future.

At its heart, society reveres the worker. The Hammering Man is the worker in all of us.