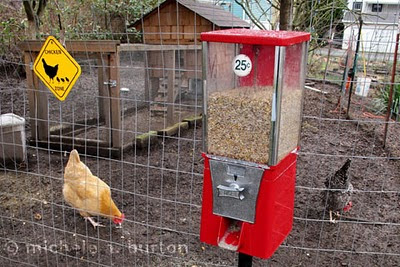 
Fertile Ground bills itself as 'Green Lodging for people who care". Their mission is to show how eco-friendly practices and sustainability can co-exist with tourism. In addition to their bed and breakfast, Fertile Ground also hosts a large urban garden adjacent to their 1908 Craftsman style house. The house and garden are across the street from the downtown Olympia Timberland Library and, as such, attract quite a bit of friendly attention from passers-by.


In addition to updating their chicken coop, Fertile Ground has added a sidewalk bench encouraging the community to stop and enjoy their garden. Ingeniously, they have also added a vending machine for chicken feed, which serves the dual purpose of having the girls earn their own keep and discouraging people from feeding the girls inappropriate food.


Stop by when you are in Olympia. Fertile Ground is located at 311 9th Ave SE