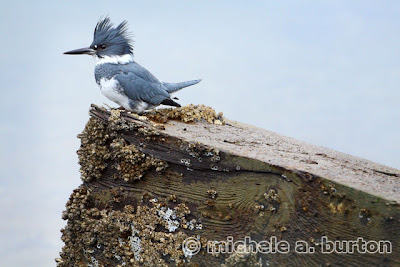 February 11, 2011
From Seattle Audubon's Birdweb:
Belted Kingfishers perch or hover over open water, watching for prey. Once prey is sighted, they dive headfirst into the water and seize it with their bills. Typically prey is taken near the surface, and the birds do not submerge themselves completely. Belted Kingfishers are highly territorial and vigorously defend their territories. Their most common call is a dry rattle, often given in flight.

Belted Kingfishers almost always take food from the water, feeding predominantly on small fish. They will also prey on crayfish, frogs, tadpoles, and other aquatic dwellers.