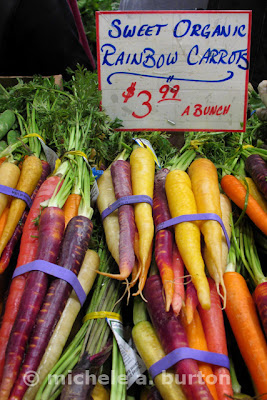 Organic Heirloom Carrots
As seen at the Pike Place Market
Seattle, WA
February 19,2011
From http://carrotmuseum.co.uk/history.html
The World Carrot Museum (yes) - a virtual museum that attempts to collect and present information on all aspects of carrots. The museum does not currently have a brick and mortar existence but operates only as a website. It was initiated and continues to be curated by John Stolarczyk of .

"The Wild Carrot is the progenitor (wild ancestor) of the domestic carrot. It is clear that the Wild Carrot and Domestic Carrot are not the same species and both co-exist in the modern world. It is a popular myth that domestic carrot was developed from Wild Carrot, probably because of its similar smell and taste. Botanists have failed to develop an edible vegetable from the wild root and when cultivation of garden carrots lapses a few generations, it reverts to another ancestral type, a species that is quite distinct.


Wild Carrot is indigenous to Europe and parts of Asia and, from archaeological evidence, seeds have been found dating since Mesolithic times, approximately 10000 years ago. One cannot imagine that the root would have been used at that time, but the seeds are known to be medicinal and it is likely the seeds were merely gathered rather than actually cultivated.

Wild carrot has a small, tough pale fleshed bitter white root; modern domestic carrot has a swollen, juice sweet root, usually orange. Carrots originated in present day Afghanistan about 5000 years ago, probably originally as a purple or yellow root like those pictured here. Nature then took a hand and produced mutants and natural hybrids, crossing both with cultivated and wild varieties. It is considered that purple carrots were then taken westwards where it is thought yellow mutants and wild forms crossed to produce orange. Finally some motivated Dutch growers took these mutant orange carrots under their horticultural wings and developed them to be sweeter and more practical. It's a long story."