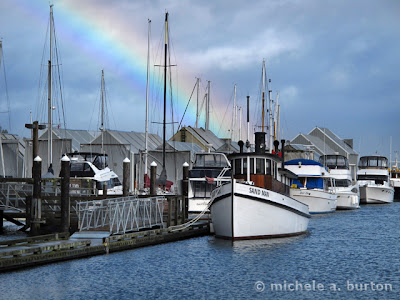 Sand Man at the end of the Rainbow
Percival Landing
Olympia, WA
March 10, 2011
Information on the life of the 100 year old tug, Sand Man, can be found in the article "Vintage tugboat Sand Man to shine at Saturday centennial" at Pacific Northwest Boating News
Photos of the boat, past and prsent, can be found at the Sand Man Foundation's website.

Highlights of the Life of Sand Man
1910 – 1987
Commercially operated tugboat / towboat throughout Puget Sound; always locally owned and based in Olympia


1998
Listed on the National Register of Historical Places – Vessels


2005 – present
After being out of the water for nearly seven years, Sand Man was re-launched on Sept. 1, 2005. Since then, she has been operated as a floating museum at Percival Landing, dedicated to the maritime heritage of Olympia and South Puget Sound
Budd Bay Budd Inlet Historic boat National Historic Vessel Olympia Percival Landing Photo of the Week Rainbow Rainy Day Sand Man Sandman tug tugboat Winter