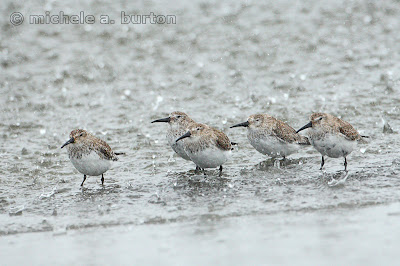 Migrating Western Sandpipers
standing in the surf during a hail storm
Grays Harbor, WA
Calidris mauri
April 14, 2011
Grays Harbor Shorebird Festival
April 29 - May 1, 2011
From late April through early May, hundreds of thousands of shorebirds concentrate on the muddy tideflats of Grays Harbor Estuary on the Washington Coast. Grays Harbor Estuary is one of four major staging areas for shorebirds in North America and one of the largest concentrations of shorebirds on the west coast, south of Alaska. Shorebirds gather here in the spring to feed, store up fat reserves, and rest for the non-stop flight to their northern breeding grounds.
The Western Sandpiper (Culidris mauri) is the most numerous shorebird on the Pacific Coast of North America. Between 250,000 and one million individuals are present on single days in San Francisco Bay, Grays Harbor, the deltas of the Fraser, Stikine, Fox, and Copper rivers, and Redoubt and Kachemak bays during spring migration from mid-April through mid-May (Page et al. 1979, Butler 1994, Gill et al. 1994, O’Reilly and Wingfield 1995).

Western Sandpipers migrate from as far south as Peru and Panama to Alaska and the Arctic.

Check out the Grays Harbor Shorebird Festival website for birding trips and lectures during the migration. 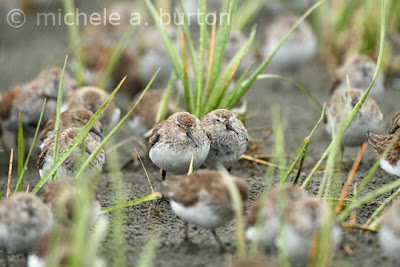