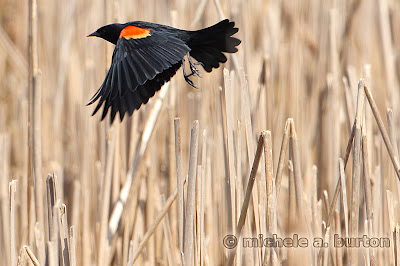 from BirdWeb: ©2005-2008 Seattle Audubon Society
Red-winged Blackbirds are among the most well studied birds, especially in regard to behavior. They form flocks outside of the breeding season and nest close together. Although they pack tightly into small areas, they are very territorial during the breeding season. Males often sit up high on tall cattails surveying their territories and will aggressively fly after intruders with their red wing-patches displayed boldly. They forage on the ground, but will also forage in shrubs and trees.


Nesting
Red-winged Blackbirds can breed colonially, but that may be more as a result of patchy breeding habitats than true colonialism. They are polygynous: males commonly mate with 2 to 4 females and can have as many as 15 mates. Nests are made of grass, and are usually lashed to cattails, bulrushes, or other emergent vegetation close to the water. The female incubates 3 to 4 eggs for 11 to 13 days. She broods the young and brings them food. The male may help feed young at the nest his primary mate, but additional mates do not generally get help from the male. The young leave the nest 11 to 14 days after hatching but stay on the territory for another two weeks. The female (and occasionally the male) feeds the young while they are on the territory and for up to three more weeks after they leave the nesting territory. Females occasionally will raise second broods, but single broods are the norm.
Agelaius phoeniceus Bird Cattails Flight Flying motion Olympia Red Red-winged Blackbird Swantown Marina wing-patches