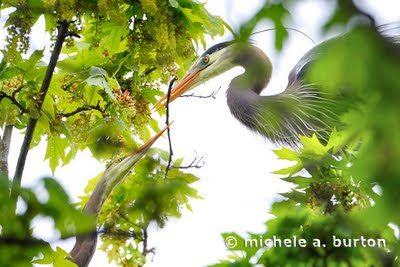 Great Blue Herons preparing their nest
Kiwanis Ravine
Seattle, WA
May 16, 2011
In 2003, the City of Seattle designated the Great Blue Heron as Seattle's official city bird after a yearlong campaign by the Seattle Audubon Society. The largest nesting colony in the city (37 nests counted in 2000) is found just east of Discovery Park in the Magnolia neighborhood. Each spring, as the Big Leaf maples leaf out, pairs of herons return to the rookery to begin remodeling old nests and building new ones. Large twigs and small branches are flown in, transferred to the nest builder, analyzed for suitability and then carefully placed into the nest.
After the nest is properly fortified, three to five eggs will be laid. Both parents will incubate the eggs for a period of about a month. Newly hatched young will develop for about 60 days before their first flight and will depart the nest approximately 90 days after hatching. The adult herons leave the rookery soon after. Then, the many months of waiting begin, until the Big Leaf maples begin to flower, and the familiar primordial call of the Great Blue Heron fills the ravine once again. 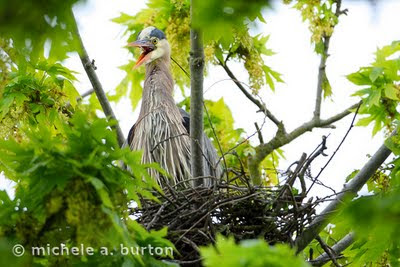