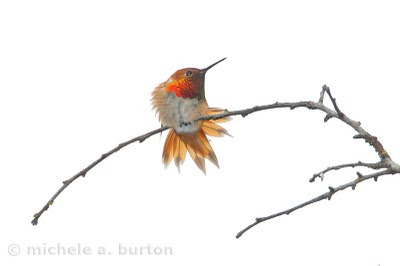 Rufous Hummingbird
seen at two of its favorite perches -
the crown of a hawthorn tree and taking off from a utility line
Black Lake Meadows
Olympia, WA
May 29, 2011 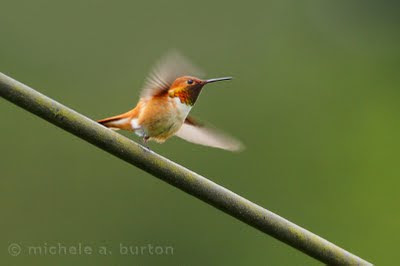 A cool fact about birds in general and hummingbirds specifically is that they are creatures of habit. Once you find where they like to perch, it is probable you will find the hummingbird in the same location day after day. I was lucky enough to hear this Rufous hummingbird flying one day at while I was walking at Black Lake Meadows. He landed on the utility line. I watched for a half hour as he made his way back and forth between his two favorite spots. I have since been back three times and have found him perched at the same spot.
In Springtime, the air fills with the electric buzzing of hummingbirds. Native Anna's and seasonal Rufous hummingbirds create miniature symphonies. Twist your head quickly to see where they are going. Watch out if you are in the path of a territorial or mating dispute! Despite their appearance on tea towels, notecards and other genteel accouterments, hummingbirds can be downright vicious when you get in their way.
Use your ears and then use your eyes to see these tiny treasures.
baggage claim Black Lake Meadows Olympia Photo of the Week Rufous Hummingbird