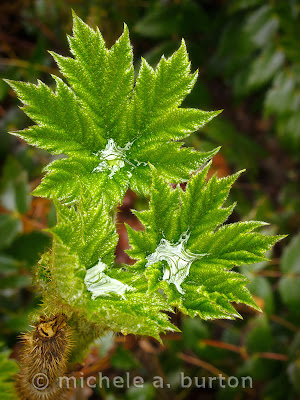 "Even the leaves have little-bitty thorns," said Peggy Hunt, an agronomist at the Native Plant Nursery in Palmer, Alaska. "They go through your skin. You wear jeans, they still go through those jeans. And the thorns will fester. It's like getting a splinter. You really have to dig them out."

Devil's club is also abundant, infesting at least 50,000 acres (20,000 hectares) throughout the state, according to agronomists' estimates. The range of devil's club extends to California.

"For me, it's like a weed, a nuisance," Hunt said. "I have a tire swing for my daughter, and every year I'm out there hacking this plant away, because it just takes over."

So why is Hunt helping to grow more of the stuff? She and other plant ecologists see potential among the thorns. Devil's club may find a use as a natural "fence"—or as a resource for a treatment for tuberculosis adapted from Native American folk medicine.

The plant's bad reputation may be its best-selling point. When the state division of parks was looking for a natural barrier to keep visitors from wandering off trails, "devil's club was the first plant I thought of," said Stoney Wright, a plant ecologist and manager of the Alaska Plant Materials Center, which operates the nursery.

A Remedy for Stomach Aches, Psoriasis, and Tuberculosis?

"By simply planting something that was native and common to the area, you could in essence put up a barbed wire fence," Wright said. "There are very few people—other than tourists from the Lower 48—who would venture into devil's club."

"I could think of certain situations where devil's club would be very attractive next to a building," Wright said. "It has a very good color. It has that bright red fruit on it."

Devil's club may also be a source of medicine, according to David C. Smith, a former city manager in Seldovia, Alaska, and founder, in 1998, of Alaska Green Gold in Anchorage, a company that evaluates the marketability of Alaskan medicinal plants in China.

Smith started by researching ginseng, then switched to devil's club because of the plant's many traditional uses in Native American medicine as a remedy for everything from stomach aches to psoriasis to tuberculosis.

For more than three years, with grants from the U.S. Department of Agriculture and the National Science Foundation, Smith has experimented with methods for harvesting the plant's bark and roots. He is now pursuing a grant from the National Institutes of Health to assess the plant's effectiveness against tuberculosis.

Speeding Up the Weed's Growing Cycle

Each year, tuberculosis kills 1.3 million people in China, according to the World Health Organization. Smith has consulted with researchers in China who "think a Chinese patient is more likely to complete the treatment and continue drinking tea rather than taking pills," he says.

Previous studies have associated the anti-tubercular properties of devil's club with polyenes, pigment-producing molecules found in some plants, said Guido Pauli, a research associate professor at the Institute for Tuberculosis Research in Chicago. But other compounds may be responsible. "We are really open to looking at anything," Pauli said.

A touchy issue with devil's club is that some Native American groups may resent any appropriation of traditional medicine. Other groups may welcome a new cash crop.

At the Plant Materials Center, however, the immediate challenge is to find a way to speed up the weed's growing cycle to produce marketable quantities. In the wild, devil's club goes two winters before germinating. At the nursery, researchers are experimenting with techniques to halve the growing time.

Chesloknu Foods, a jams and jellies company operated by the Native Village of Seldovia, is helping Smith harvest devil's club. Chesloknu has been fighting the weed's incursion into its blueberry fields.

"The first comment around here was, 'Great, if someone wants to pay us for devil's club, that would be wonderful," said blueberry farmer Rod Hilts, manager of Chesloknu. "It's a very tough bush to work around, so we have some interest in thinning it out."
Bellevue Parks Devil's Club King County's Native Plant Guide Lewis Creek Park Medicinal Plant National Geographic Today Native Plant Photo of the Week Spring