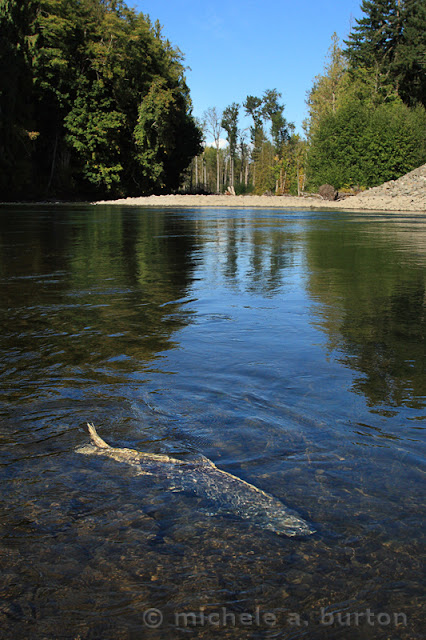 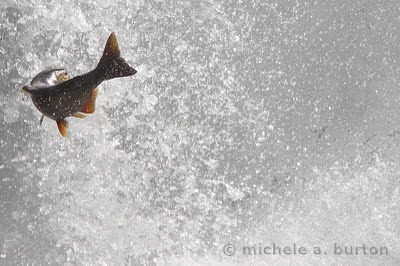 This is a story of two salmon completing their journey from ocean to spawning grounds; one fish has spawned on a river which is the center of the grand experiment into removing the century-old dam to allow native fish to return to the pristine waters of Olympic National Park; the other fish is jumping into a tall cascade to attempt to bypass a fish ladder on its way back to the Tumwater fish hatchery where it will be captured.

The salmon in the picture at the top was seen on the lower Elwha River, just a mile or so from where the Elwha Dam is being removed. The hundred-year-old dam was built without a fish ladder, virtually eliminating what had once been a thriving salmon river. The Elwha River Ecosystem and Fisheries Restoration Act was passed by Congress in 1992, calling for the restoration of the fishery and the surrounding ecosystem. In September 2011, after many years of research, negotiations and preparations, the Elwha and Glines dams were breached to begin a three year, $325 million process of removing the dams. Progress on the dam removal can be watched with a series of webcams. To learn more about the project, check out the National Park Service's website

The salmon in the lower photo was spotted at Tumwater Falls. According to the Washington Department of Fish and Wildlife, "The Deschutes River lower falls was historically an impassable barrier to salmon and other anadromous fish, preventing a native salmon run on the river.

In 1954, the Department of Fisheries constructed fish ladders to allow fish to circumnavigate the falls and rapids. A facility to capture returning salmon was established adjacent to the upper falls in 1964.

In the mid 70s more than 10 million fall chinook salmon were released annually from the facility; today, the annual release is about 4 million chinook. These fish contribute to recreational and tribal fisheries throughout Puget Sound and the Strait of Juan de Fuca. Coho salmon were introduced into the Deschutes watershed in the 1970s. Established with hatchery fish, this run of salmon has been allowed to maintain itself through natural propagation."