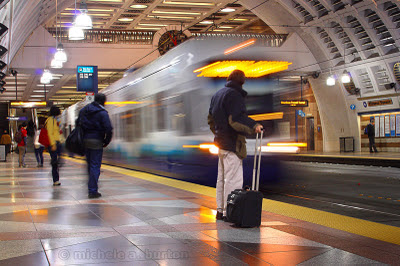 November 3, 2011
From the Metro Transit web site:
Stop #10 on the Downtown Seattle clock walk.
Robert Ketcherside is a board member of the Puget Sound Historians Guild. He gives walking tours of the downtown Seattle clocks through the Seattle Architecture Foundation.
"The clock walk has been featured in episode 98 of Perils for Pedestrians; webzines such as Seattlest; the Mount Baker newsletter; a couple of times by the Seattle Sketcher."
available light clock walk clocks Downtown Seattle Link Light Rail Photo of the Week Pioneer Square Station slow shutter speed Sound Transit