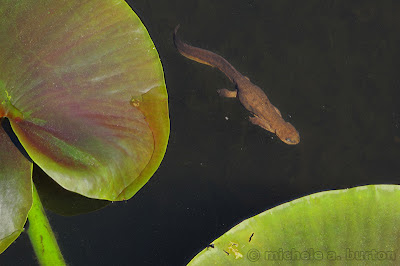 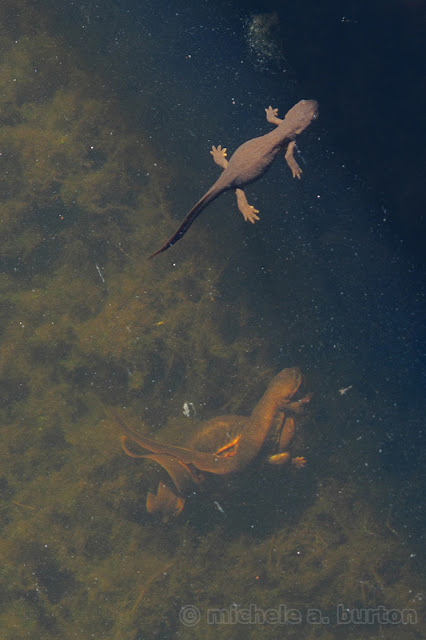 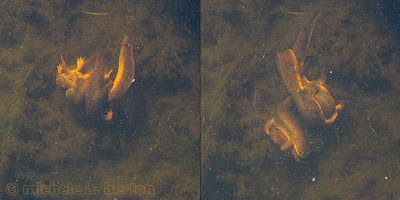 Rough-skinned-newt populations are among the five most-common amphibians in Washington, and also one of the easiest to find and identify. They are up to 8 inches long and are brown with bright orange bellies.

They are active above ground and visible during the day. Rough-skinned newts return to the same pond each breeding season.

According to an article in the Seattle Times:
The deceptively cute newt: 'You don't want to kiss them' -
Lynda V. Mapes, Seattle Times, February 24, 2003

Their homing instinct is remarkable: In one experiment, every newt transported in a light-tight bucket more than a mile from their home pond found the way back within a year, said Bill Leonard, an endangered-species biologist for the National Marine Fisheries Service.

Once at the pond, males patrol the shore for females. So hair-trigger ready are they for breeding that if a stick is tossed in their path, the males will approach it to see if it is a mate, said Robert Storm, professor emeritus at Oregon State University.


A single female approaching the breeding pond can be swarmed by dozens of males, creating a wiggling wad of newts big as a softball.


Courtship is an elaborate and lengthy affair.


The male grasps the female behind her front legs and crawls on her back, locking onto her and holding her tight for hours, underwater, where the two breathe through their skin.


Afterward, the male walks in front of his mate — underwater. As he walks along in the shallows, she follows closely, picking up jellied packets he has left topped with a dollop of sperm.


She stores the sperm inside her reproductive tract until she lays her eggs. The fertilized eggs are deposited one at a time on subaquatic vegetation.


Larvae hatch out within about a month, depending on water temperature. They emerge equipped with tiny, feathered external gills, giving them a space-alien appearance. The newts spend the spring and summer swimming about and chowing down on larvae and other tiny fare.


By August, their feathered gills have been re-absorbed to tiny nubbins and the newts have grown lungs and nostrils. They head to the uplands and the forest with the coming of the autumn rains.


Rough-skinned newts hunt their food, walking the forest floor and wagging their heads from side to side in search of snails, small slugs, insects and other invertebrates, which they bag with their sticky tongues.


Living three to 10 years, newts can be found in surprising density: Leonard remembers collecting 500 newts in one trap on one night at Fort Lewis.


Kelly McAllister, a biologist with the Washington Department of Fish and Wildlife, has been monitoring a pond south of Olympia for nearly 10 years. He has never come back without seeing some newts.


Virginia rails and blackbirds that share the boggy realm of the newt don't even come near as the newts swagger about on land, with their all-terrain, hand over hand, four-wheel amphibian drive. Eat one, and those birds would be dead in 10 minutes.


Scientists have tested 30 potential predators of newts, from belted kingfishers to great blue herons to bullfrogs and fish, finding in every case that the newt killed them.


Sometimes the newt crawled unharmed out of the gasping mouth of the deceased within minutes of being swallowed.


A sample of the poison had lost none of its potency when examined 11 months after storage.


Rough-skinned newts are common from the Coast Range near San Francisco through the entire west side of Washington all the way to Southeast Alaska. They are found as far east in Washington as Klickitat County. They are one of the most common amphibians in Western Washington, along with Pacific tree frogs, red-legged frogs and long-toed salamanders.