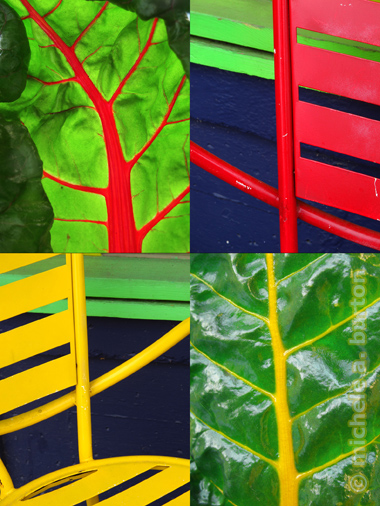 I have been thinking quite a bit lately about the process of 'designing a photograph'. For many of us, photography is something which happens almost serendipitously - we are out at an event, in a park, on vacation or at a family gathering - when a photo suddenly appears out of nowhere! The perfect balance of light and shadow seemingly appears on cue.

But how to create an intentional image?

When I saw the colored chairs at Don's Ruston Market & Deli﻿, I was intrigued by the way the chairs intersected the wall and window sill colors. I knew that the story I wanted to tell was about the way color and shape can break up space. When I got home, I looked at the dozen or so shots I had made. Several were appealing. But there was something missing. The photos felt somewhat derivative - as though I had captured someone else's ideas.

A week or so later, I was visiting a friend at Swedish Hospital in Seattle and saw flower beds filled with ornamental vegetables, including the chard. In my mind's eye, I could see some of the same primary colors and use of space that had intrigued me the previous week. I became enamored that something organic could evoke similar feelings as a man made object. I took a dozen or more photos, much to the amusement of other hospital visitors.

Arriving home, I looked at the two sets of images and decided to make this collage. I find it interesting that each panel can stand on its own with color, shape and use of space; but, each panel is made stronger when looked at in relation to the others. What does similarity say about each panel? What are the differences.

The intentional image was created by being observant, questioning what I liked about the original set of images, and looking to make the message deeper than what appeared on the surface.

Chairs Chard Collage Color design a photograph. how to pattern Photo of the Week Primary Colors