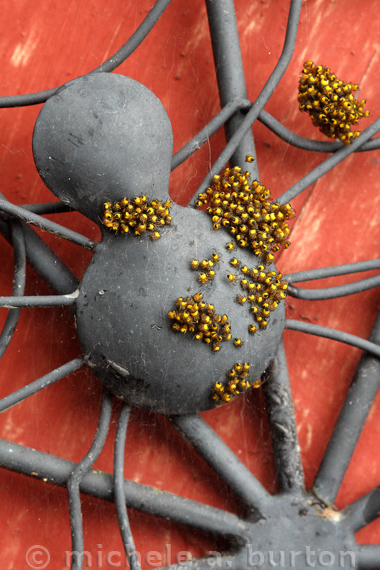 Garden Spider spiderlings on a Spider Sculpture
Araneus diadematus
Olympia, WA
May 26, 2012
On Memorial Day Weekend, I was lucky enough to see a group of newly hatched spiderlings in my yard.

When I originally saw them, dozens of baby spiders were clustered in a mass about 2 inches by one half inch. Alarmed by the closing of the gate, they quickly dispersed over an area of one foot or more - tiny yellow and black creatures scurrying for safety. They regrouped after about 5 minutes.

During the day Saturday, I took about 60 shots of the spiderlings from different angles and distances, trying to tell the story of their tiny size and large quantity. Without a frame of reference, it was pretty difficult to get a sense of scale and detail, too.

On Sunday morning, I went out in the yard to check on the spiders again. Imagine my surprise and great pleasure when I found that they had migrated several feet to a metal spider in spider web! I quickly grabbed my camera and shot multiple photos as they moved around. The body of the spider is about 1 and 1/2 inches tall.