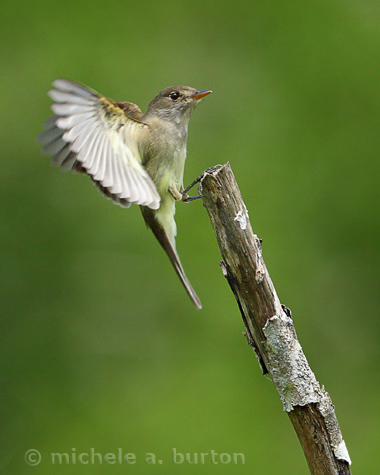 According to the cliche, we are all creatures of habit. That certainly holds true for me. When traveling between Olympia and Seattle, I often stop at a certain Starbucks to get a cup of coffee to enjoy on the road. And, on Saturday morning, it is not unusual to find me at the library, picking up a new book or movie.

While this seems obvious, what may not seem so obvious is that humans are not the only ones who are entrenched in their habits. The first two photos of this post were made June 18, 2012. The last photo was taken June 6, 2011 at the same location.

If you want to take a cliche from the ordinary to the extraordinary, consider the Willow Flycatcher. Willow Flycatchers are about 5.75 inches long. They weigh about 0.5 ounces. By comparison, a penny weighs 0.88 ounces.

Willow Flycatchers migrate from the tropics - a distance of 4,000 miles or more.

It has been one year since I photographed the bird at the bottom of this post. Today, I returned to the same isolated, willow-draped pond, hoping to see a flycatcher. I was rewarded by the same bird, or possibly one of its offspring, singing the distinctive "fitz-bew" call from the very same snag.

An 8,000 mile round trip ending at the same place it began - that's amazing! 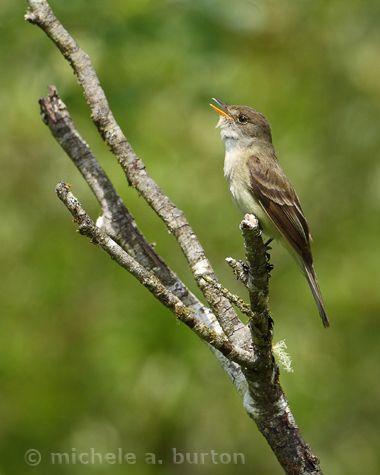