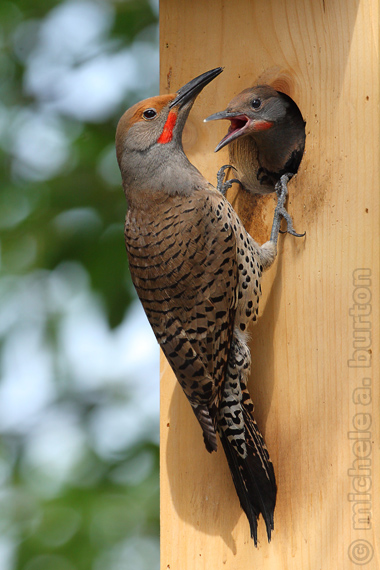 Breeding season for Northern Flickers occurs between March and June. Incubation of the 5-8 eggs laid is by both sexes. Both parents feed the young in the nest for up to 4 weeks. Feeding continues after the juveniles leave the nest, as the young birds learn to forage on their own.

According to the Cornell Lab of Ornithology Nestwatch Resource Center, "The nestlings are fed regurgitant by both parents. After three weeks, the young can climb to the entrance and meet the parents for food. After 24 to 28 days, the parents coax the young to leave the nest by withholding food and calling to them. When they leave the nest, the fledglings can fly short distances and they do not return to the nest site. The fledglings depend upon the parents for food and protection for two to three weeks. Family groups are often seen feeding together into late summer."


In flight, Flickers show the reddish undersides of their wings and distinct white rump patch.