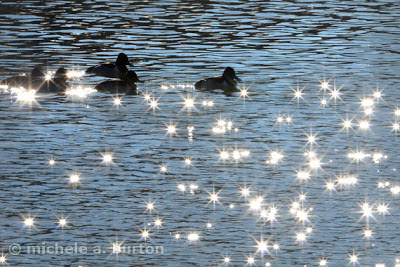 The cold crisp days and angular sunlight of our Mid-January cold spell made for excellent photographic opportunities. Bundling up against the cold winds and low temperatures, I was able to spend many a glorious hour outside observing the wintering ducks.

is a favored wintering spot for fresh water dabbling and diving ducks. Large rafts of coots, flocks of widgeons and groups of Scaups and Ring-necked ducks are a common sight. It is a marvel to watch as the Ring-necked ducks and Scaups dive and forage. And, if they become alarmed, they will take off from the surface of the lake en masse, fly a few hundred yards and then land again on the lake to resume their feeding. 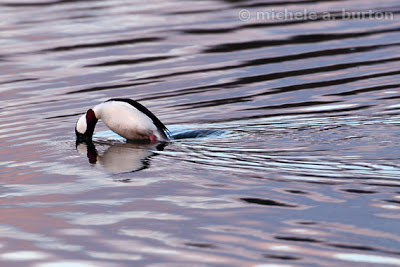 The Bufflehead is one of my favorite divers. Both sexes are distinct in their black and white plumage – dominantly white on the male and black on the smaller female. Buffleheads are easy to spot on the water as they are quite acrobatic in their diving ability. Watching them in motion reminds one of an Olympic Gymnast. Buffleheads are found wintering locally on both fresh and salt water.
Aythya collaris backlit Bird Bucephala albeola Budd Inlet Bufflehead Capitol Lake diving flock Male Olympia ringnecked ducks spectral highlights Swantown Marina swimming Washington Winter winter light