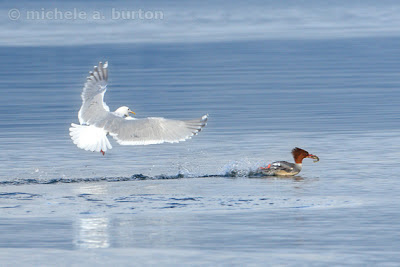 There is a large group of Common Mergansers who overwinter on Budd Inlet of Puget Sound In Olympia. It is not unusually to see them swimming in groups of twenty to fifty. The female Mergansers make a elegant sight, parading with their red head plumage extended.

Glaucous-winged Gulls are equally common around South Puget Sound. They spend much of their time looking opportunistically for a free meal - or at least one that takes minimal effort.

On a cold winter morning, while watching all sorts of diving ducks, I was witness to a chase that would make a Hollywood cinematographer proud. The Merganser bobbed and weaved while the Gull swooped and chased. Ultimately, the gull won the day and settled in to feast on someone else's fish breakfast.

Here is a video which portrays the full sequence of events.
The whole chase was over in less than 30 seconds.