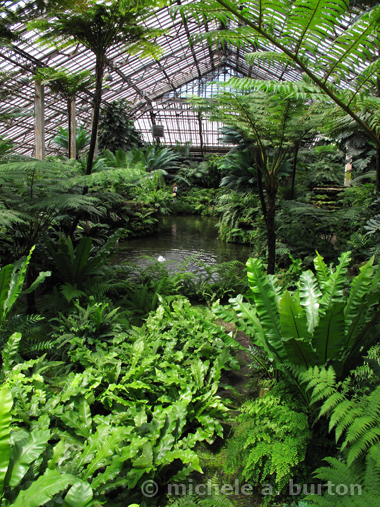 Chicago, IL
June 23, 2013
If you ever have the opportunity to visit the Chicago area, be sure to check out the Garfield Park Conservatory. The massive glass atriums which comprise most of the conservatory's 4.5 acres were constructed between 1906 and 1907.﻿ Designed by Prairie Landscape Architect Jens Jensen, the glass galleries are amazing to see. One large gallery is devoted to hundreds of types of palms, while another features the region's most varied collection of cacti and arid plants.
For my money, the fern room steals the show. Jens Jensen designed the room to mimic what he imagined Illinois might have looked like in the age of the dinosaurs. The lush ferns and ever present water remind one of the deepest jungle. Most remarkable is the sound created by the waterfall at the far end of the fern room. Jensen had the mason lay and re-lay the stones to get just the right symphony of sounds.
"After Jensen designed a prairie-like waterfall in Chicago's enormous Garfield Park Conservatory, he complained to the workman who'd built it that it sounded like a fast-flowing mountain cascade.
The workman rebuilt the waterfall several times, but Jensen still was displeased. Only after he suggested that the workman listen to Felix Mendelssohn's "Spring Song" did the workman build the waterfall correctly--so its water, as Jensen said, "tinkled gently from ledge to ledge, as it should in a prairie country." (Chicago Tribune)
Be sure to pan several hours at the Conservatory - you'll want to explore every nook and cranny.
Garfield Park Conservatory
Chicago Fern Room Garfield Park Conservatory Glass Illinois Jens Jensen Photo of the Week Pools