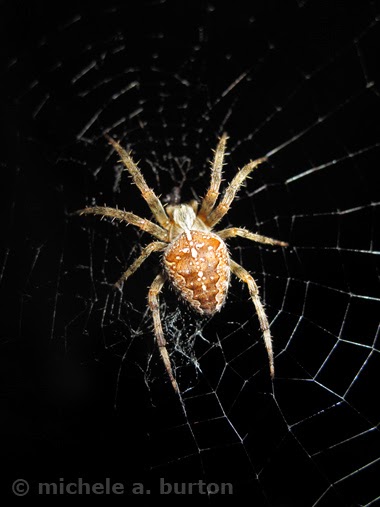 Spider in Web at Night
September 19, 2013
I like to tell my students that photography is all about compromise. You get up to shoot the sunrise and it is foggy. You want lots of depth of field on your flowers and the wind is blowing. You have great photographic plans and you leave the camera's battery on the charger at home.
The photo you see above is one of those photos that happens when you are planning on something else. As the sun was setting on September 19, the sky was clear and Mount Rainier was visible from Olympia. I rushed home, grabbed my camera and drove up to Tumwater Hill to watch the sun set and the full moon rise. My plan was perfect. Except that the moon rose about 30 degrees to the left of Mount Rainier from my vantage point! No way I could get them in the same shot! So, we enjoyed the full moon rising instead of taking pictures.
As we were getting ready to leave, my partner in crime pointed out the spider and suggested I frame it as a silhouette with the full moon. Good idea, except I was too lazy to go back to the car to get the lens that would make it happen. After taking several shots with my point and shoot that made the spider and moon the same size, I decided to see what I could do with a little flash. A couple of test shots later and voila - the photo you see above.