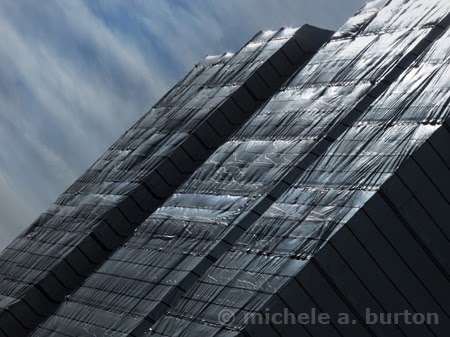 Most of the time, my mind is like a sieve. Brilliant ideas and plans make a fleeting appearance before they disappear into the cosmos.

Every once in a while, something sticks.

Twenty years ago this week, I was driving westbound on Denny way between three and four in the afternoon. It was a magnificent sunny day like we get in Seattle around President's Day. I was on my way to an important appointment (long since forgotten) when I was stopped by the traffic signal at the base of Denny Way. My eye was drawn to an old industrial building to the right; large pieces of peeling paint cast long, textured shadows against the vivid, yet aged wall. I was mesmerized.

Lacking a camera and time, I vowed to return soon to photograph the wall.

When I returned a few days later, my window of opportunity had passed. The sun had traveled further North in the sky and no longer cast shadows on the side of the building. I decided to come back the next year.

It rained every day of my February photographic window the following year. When fate allowed me to come back several years later with perfect light, the building had been repainted. It has since been torn down.

Fast forward to 2014. I found myself on Denny Way on a late February sunny afternoon. The sky was clear, blue and bright. The light was angular. I was instantly transported back in time to the mesmerizing emotions I had felt before. The neighborhood has changed and is changing. But light remains the same.